What is the total impact of an increasingly unsustainable expansion of global consumerism?

What does fairness mean in an era of warming? 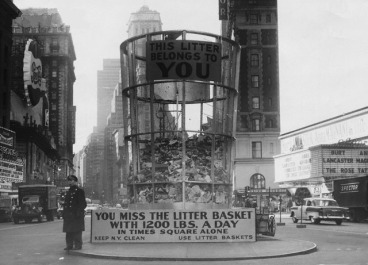 A group (from SF, Great Barrington, NY, Berlin, and Tbilisi) took a bus from downtown Tbilisi to Shindisi (Cloud Library) – artist Mamuka Japharidze’s home up in the mountain. We took objects with us, wrote obituaries for them, bundled them and buried them – a small and intentional homage to their embedded social and ecological traumas… and some people might have been disappointed that there wasn’t a happier ending, that in a way it joined the rest of the objects we indirectly bury in landfills everyday. 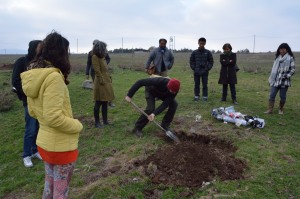 Digging the hole together

Arguably the oldest form of gardening, food forests are radical today because of what they can do and what they represent. Food Forests are human-made ecosystems generated through companion planting methods that take years to develop and thrive. Arguably the most resilient agro-ecosystem because of their unassisted regeneration, they are known for sustainable plant-based food production.

The site of the Arctic Food Forest will be located in Alaska’s Arctic, potentially near Nome or Kotzebue. Edible plants are transplanted from southern Alaskan regions as needed due to global warming. The Arctic Food Forest is being developed through a process of co-ownership with local stakeholders. Included in the Arctic Food Forest are arctic medicinal plants. These plants will be a source of income, with planned distribution routes to other parts of the United States. One such plant is Devil’s Club, also known as Alaskan ginseng. Devil’s Club, for example, is used for colds, cancer, depression, stomach problems, broken bones, burns, congestion, and inflammation. It is considered “strong medicine” due to its effects on psycho-spiritual aspects of a person.

The process of creating the Arctic Food Forest will be documented and a how-to booklet will be distributed. Many of the documentation materials will be sourced from the food forest itself.

In his writing, Wantrup derived economic and social criterias for sustainability, irreversibility, unknown future probability, and “extramarket values” of collective goods. He integrated concepts of:
common property, the Precautionary Principle, conservation land use planning, and the importance of protecting endangered species and biodiversity. 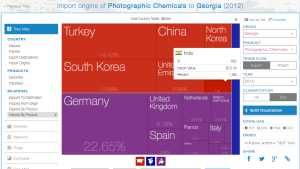 It was as if God had decided to put to the test every capacity for surprise and was keeping the inhabitants of Macondo in a permanent alternation between excitement and disappointment, doubt and revelation, to such an extreme that no one knew for certain where the limits of reality lay.