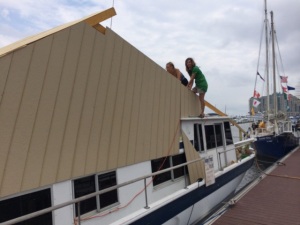 I’ve been building out WetLand for 27 days, working closely with between 3-8 people daily. A nautical engineer, professional fiberglass painter, and professional boat shipper were brought on. A group of artists and art facilitators build and create the space together. We learn new skills as we go, and we teach each other what we’ve learned. Our individual hands are allowed to show in and on the structure. While WetLand began as a concept, at Day 27 it’s truly a collaboratively created sculpture. People have initiated structural and artistic changes to create something that not only functions as a sculpture but also as a home.  Some of us already living onboard as we build, the space takes on characteristics of our own use and we create around it. Awaiting animals and jointly learning to create a human-made wetland has expanded our networks well beyond the formative group of collaborators and into the fabric of the city. Karla Stingerstein currently works closely with several nurseries to implement different growing spaces on WetLand, while Esteban Gaspar Silva is engineering tunnels and bridges throughout the space, from one level to the next. On site now, Greg Lindquist and Anna Ekros both vision different areas of the sculpture, using reclaimed wood and salvaged paint to begin articulating specific areas. A cohesiveness is created by repeating elements from one area through the next. Tongue-and-groove flooring rescued from a gym in Iowa comprises the flooring in the main space and also WetLand’s façade. Simultaneously building and living with a group is an intimate experience and lead-in to the public launch on August 15, where we will invite strangers into our space, and mutually share ideas.

HOW TO by Mary Mattingly.

Three quarters of American bird species depend on wetlands for rest, food, or nesting, but over the past two centuries we have destroyed 60 acres of wetlands every hour. – Lucy Lippard on Jane Gleeson-White

WETLAND: As environmental instability continues to transform our cities, how can we connect local networks and different individual efforts to work together more cohesively? How can we utilize the tools of resource decentralization and network interdependency to provide for each other, and how can these local supply chains more clearly account for the social and environmental traumas embedded in production? Recent volatility in global food and fuel costs has increased our awareness of the existing food supply’s vulnerability as well as the detrimental effects of industrialized food systems. As climate change increasingly affects our lives, we need to more fully consider environmental costs of our city’s dependence on exterior sources for food, water, and other goods. WetLand is a hub and a node. On WetLand participants eat food grown on board and drink available water sources through river water remediation and purifying rainwater. Free and open workshops and events promote skill sharing and local organizations working in similar ways. WetLand promotes and fosters movements that have been building in Philadelphia. More and more of us are growing some of our own food at home and in cooperative spaces, forming community-wide initiatives that support urban farms, rainwater collection, and storm water management.

In 2009 I founded the Waterpod Project: a public space, habitat, and living system on a barge that circumnavigated New York’s five boroughs. It was built on a flat deck barge and consisted of a fully functional ecosystem that provided food, energy, and clean water to inhabitants and guests through regenerating gardens, chickens for eggs, rainwater purification, greywater cycling, solar and human powered electrical energy. All food, water and human waste cycled through the on-board living systems into renewed soil and water, and the building materials used to make the structures were also from New York’s waste stream. One of the project inquiries was to see how possible it would be to subsist off of the food we grew, eggs from four chickens, solar and bike power, and purified rainwater. All of the materials were found or exchanged through a barter economy arranged with businesses and municipal agencies in NYC. I wanted to figure out how much time we spent maintaining these systems versus the time we spent working our day jobs to purchase these supplies outright. After an initial large investment of our own labor, we ended up with a system that supplied us with all of our basic needs for around 2.5 hours of upkeep a day. The Waterpod was a proposal for a potential future in New York, with more people contending with rising sea levels, and less useable or affordable land, but I also wanted the space to describe some of the ways people the world over are already living, to illustrate our interconnectedness. It was a stage and an experiment. Five friends lived with me on the Waterpod, and close to 200,000 people visited in the five months it traveled around New York.

In 2012 I embarked on the Flock House project: a group of three spherical public spaces that moved around New York City, and from there have moved to Omaha, NE. A significant difference was the Flock House living systems could not fully support a family or even one person. While the Waterpod’s structure was made cooperatively through a barter economy, in Flock Houses we established barter and trade systems with our neighbors to meet our most basic needs.

With each of these projects, I come to a greater understanding of the need to share basic resources with one another, and learn from each other. On countless occasions, I have thought I’ve known what I’m doing only to be shown a better way by a complete stranger. That is one of the biggest benefits of a working public space that incorporates habitation with openness. Art to me is as necessary as the basic human needs described in this booklet. Food, water, tools, their visible and invisible networks embody some of my deepest concerns and most hopeful aspirations. In late-stage capitalism everything is a commodity, from homes to objects, from land, to water, air, garbage, debt, and each of us. In one way or another, these are things that affect us all, and by working towards building stronger networks interdependent on one another, we can begin to reclaim common spaces, and more easily provide for each others’ basic needs.

One of the goals of this booklet is to emphasize working together and sharing tools that can empower each other. It asks, Can we together build a world where we connect through differences, instead of indifference? It explores local ecologies, resource exchange, and practical techniques for small-scale water and food systems. The Networks section is a small asset map of Philadelphia-based groups already invested in interdependency. It is in no way complete.

Proposal 1 – Dropping the Small Ball from Mary Mattingly on Vimeo.

Proposal for Dropping the (small) Ball 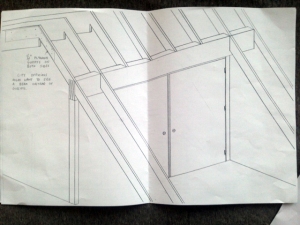 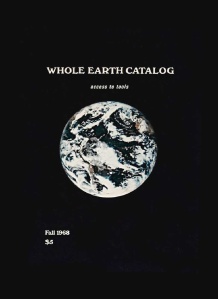 Industrialization in the last century in America has encouraged thinking that advocates for less understanding of a whole system. Media and the marketplace continue to promote a techno-utopian idealization of the future for a collective humanity. This perspective is either naïve to or knowingly benefits economic and political interests.  This type of endorsement persists in the face of every new disaster: as we alter our own ability to inhabit the planet, we will continue to believe we can counter the damage with another technological innovation. When I examine fragmentation, whether in learning, attention, or the obscure links within a long supply chain I ask: who has access to the larger picture, and the power that comes with it?

I’m currently studying the potential for micro and macro networks to participate together in interdependent systems of exchange: with each other, the earth, and non-humans. The Internet, with its decentralized network of attributes, seems the perfect place for this research to accumulate.

This site will consist of short essays, scanned notes, collected and uploaded research. As tribute to whole systems thinking, it will be organized using the overarching framework of the 1968 Whole Earth Catalog as a set of overlapping categories: